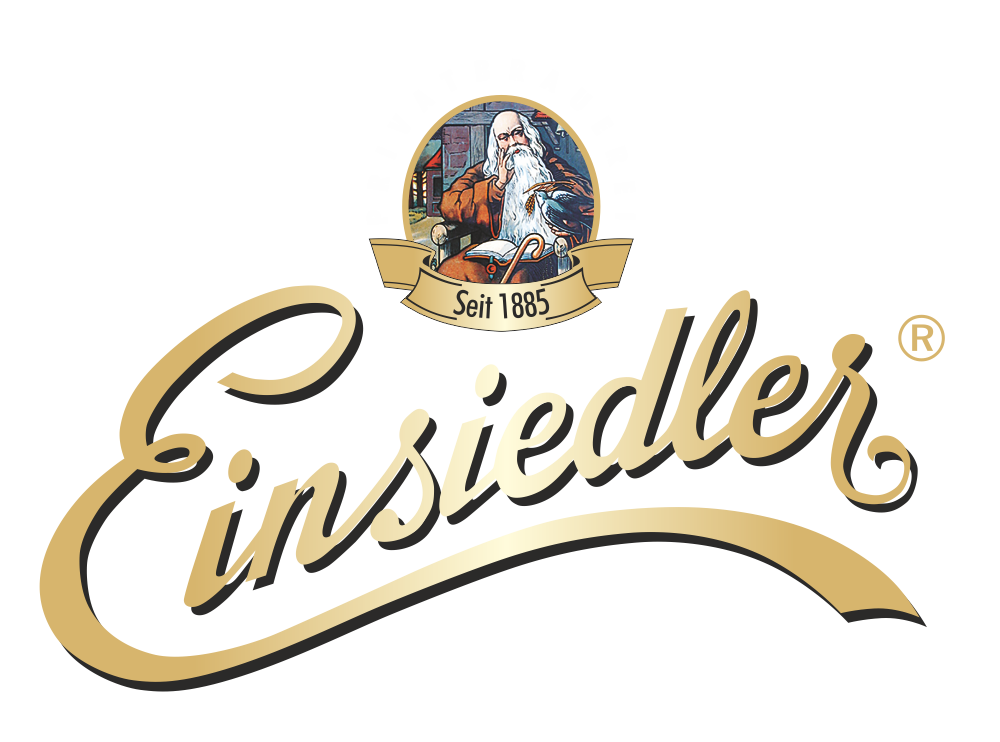 Einsiedler Brauhaus GmbH is a midsize brewery located in Chemnitz, near the Czech border. It all started in 1885 when machinery industrial, Mr Emil Schwalbe, established the brewery in Einsiedel, near Chemnitz. During the 20th Century the brewery went through an eventful history. Einsiedel is a tiny place situated at the foot of the Ore mountains, part of the Bohemian massif, in the Free State of Saxony. The place Einsiedel was incorporated by Chemnitz in 1996.

In 1885 Emil Schwalbe had a luminous idea by purchasing a few local farms on the outskirts of Einsiedel that provided excellent well water. On that same location Emil Schwalbe started to build his brewery.

The newly built brewhouse (in the background the lauter tun) had a capacity 300 hl. The Brewhouse consisted 4 more parts (a mash tun, a mash pan, a lauter tun and a wort kettle) could produce 1200 hl daily.

The brewhouse was destroyed considerably at the end of WW II but rebuilt in the original style. We still brew in that same brewhouse today.

Before the Great War the brewery encountered severe difficulties to supply customers. The production peaked to 70,000 hl per annum before WW I. In Europe traditionally Beer from Breweries got delivered mainly in kegs to pubs and restaurants or to retailers. Back in the day these retailers had small bottle filling equipments where the beer was filled into flip top bottles and redistributed within the local communities.

During WW I most of the workers were called to join the army. Later the brewery faced lots of problems to get supply of raw materials. After the Great War the production represented only half of its peak before WW I.

In 1945 the brewery was severely destroyed by air strikes. Raw materials were hard to find. The annual production declined to 24,000 hl. The brewery was put under governmental administration and shortly after partly expropriated. In 1972 the brewery got fully integrated into the VEB Drink Collective Combine Karl-Marx-Stadt.

It lasted until 1959 when the production reached 100,000 hl again. In 1972 the brewery received strict instructions by the government to produce only bottled beer. The keg filler got dismantled. Since the Seventies of the 20th Century 200,000 hl of beer are being produced per annum on regular basis. In the Eighties the production climbed to 300,000 hl on yearly basis.

April 1990, after the fall of the GDR (aka East Germany) the brewery returned into private ownership. The daughter of the latest owner runs the business. Since the Summer of 1990 we brew again according to the Reinheitsgebot.

Almost the entire machinery was worn-out and is no longer inovative neither does it meet current technological requirements. The Brewhouse was from 1907, the fermentation tanks came from the same period of time and the keg filler didn’t exist anymore.

Therefore everything needed to comply with the latest state of the art. Step by step a brand new fully automatic Brewhouse replaced the former one into the old building. During the induction brewing we are now capable to produce up to 8 brews of 330 hl each per day. New fermentation tanks were purchased. The first 9 fermentation tanks had a capacity of 1200 hl each. Later we added more. In 1991 we bought a new keg filler.

Our brewery in short numbers:

1885: The year of birth of the Einsiedler Brewery

29 August 1885: Registration in the Chemnitz Commercial Register … and thus official birthday of the brewery

24 March 1887: Registered trademarks of the first beers of the brewery founder Emil Schwalbe.

1903: Conversion of the private brewery into Einsiedler Brauhaus PLC

1907/1908: Transport of the boiler from Chemnitz to Einsiedel, built in the Germania machine factory.

1912: Purchase of the first trucks

1913: Approx. 70,000 hl turnover; numerous awards prove the already very good quality of the beer at that time. Speciality is the “Einsiedler Bohemian”, which is said to have come very close to the so-called “real Pilsener”.

1914: World War I: Military service for a large part of the workforce; Horses and trucks must be handed over to the army; the delivery area is significantly restricted.

1935: 50th anniversary of the Ensiedler Brewery

1937: The branch Of Einsiedler Brauhaus is sold to the Winterling brothers from Bavaria

Until the outbreak of World War II, sales remained relatively constant at about 38,000 hectolitres.

In 1941, , the “Einsiedler Crystal” was launched as a bright special beer. (Photo from 1937: Karl Schwalbe – 1st row, 4th from left – with firefighters in the Schalander)

5 March 1945: World War II: significant losses in output. The brewery is significantly damaged by an aerial attack. The staff rebuilds the brewery itself and continues production (“thin beer” with 2-3 % wort).

1948: The Economic Commission in the Soviet Occupation Zone approves a beer substitute drink at the price of RM 50 per hl incl. beer tax.

1954: Through the council of the municipality of Einsiedel, the Chemnitz merchant Möschler is appointed as a fiduciary administrator of the still private company.

1959: The brewery’s staff urged the administrator Möschler to apply for state participation, as it was seen as a purely private company in the GDR. Because the owners Winterling are domiciled in Bavaria, the state participation is rejected by the council of the district and instead in 1960 the lease of the brewery to the “People’s Own Company United Breweries Karl-Marx-Stadt” was determined. The owners themselves had no influence on this.

1972: Year of fate for many medium-sized private enterprises in the GDR.

The Winterling family is also permanently expropriated by the forced sale to the state.

The Einsiedler Brewery is now part of the “State-Owned Enterprise BRAUSTOLZ in the Karl-Marx-Stadt Beverage Combine”.

Due to the socialist planned economy, the Einsiedler Brewery is fixed on exclusively bottled beer production, keg beer gastronomy with Einsiedler practically no longer exists.

Recordings of the brewery from the early years of the GDR

1990: In 1990, the Einsiedler Brewery was reprivatized by the entrepreneurial couple Leutheußer from Marktredwitz/Oberfranken (Mrs. Leutheußer is the granddaughter of Hermann Winterling). As one of the first breweries of the former GDR, Einsiedler brews again according to the German Purity Law before the Day of German Unity. To date, more than €20 million has been invested in the modernization of the facilities.

In addition to the technical innovations for quality assurance, the “New Land Market Economy” had to be conquered. A variety of marketing measures have been implemented in order to give the Einsiedler brand a resounding name.

1992: From 1992, the brewhouse at the site, which had already been built 87 years earlier, is completely modernized and the computer-aided facility is officially inaugurated in 1993.

1993: In 1993 the first Einsiedler Brewery Festival takes place, which has meanwhile developed into a cultural highlight in Chemnitz. Thousands of visitors visit the city’s gates every year to take part in the two-day spectacle live.

1998: The Einsiedler Brauhaus is the first Saxon brewery to produce Weissbeer. With the inauguration of a newly built Weissbeer plant on 23 April 1998, this tradition is also being re-established outside Bavaria, because already in the 1920s, white beer was a Einsiedler beer specialty.

The small brewery museum also opens in that same year.

In August 1998, Frank Kapp, the long-time authorized representative and managing director, and Hans-Dieter Oermann, a lawyer, take over the shares of the Leutheußer family.

In November 1998, the Einsiedler Brauhaus presents itself for the first time with an extensive homepage on the Internet, two years later the redesign takes place with numerous service tools.

2000: : In the year of the new millennium, the traditional brewery has been in place for 115 years. Again as a private brewery, as founded by Emil Schwalbe at the time, it professes its regional roots and sees itself as a “tangible brewery”.

2007: Einsiedler Landbier, or one of the ten other varieties, from the Einsiedler Brauhaus in Saxony is known throughout 11 other federal states. Even out of Europe you can enjoy the brewing art from the Ore Mountains.

A further investment in a new bottlefiller enables the filling volume to be expanded.

The Brewery Festival also celebrated its 15th edition, during which visitors could experience Mike Krüger (a famous German Comedian) live on Sunday.

INVESTMENTS IN THE FUTURE

2012: The brewery builds a new warehouse. After completion, it will be given a unique design in August 2015

2015: Modernization of the palletizer and the depalletizer.

Due to the difficult path of our crates to the upper floor to our bottle house, the company BEYER Maschinenbau GmbH had to come up with something very special. In addition, our palletizer has been completely renewed and equipped with two new robots for palletizing and two spiral conveyors for transporting up and down the full and empty crates.

2017: The bottle inspector – the heart of bottle line

A new high-end product from company Heuft Systemtechnik LLC has been enriching our bottle house since February 2017.

Every drop, label and glass splintering on the bottle is illuminated and sorted by this bottle inspector.

The unique thing about this machine is the Light control, which illuminates the glass bottle floor with the help of flashes and can thus detect any small glass splinters.

New location, complete renovation of the premises and a modern keg filler, which fills 80 kegs per hour, impact January 2018.

Kegs are now cleaned fully automatically from inside and outside, as well as steamed and filled.

In order to keep up to date with the latest in terms of the optics of the bottles, we have invested in a new labeling machine from company RENNER LLC. As such we remain up to date and we keep insisting on the highest standards

Run capacity is limited to 33,000 bottles an hour. It uses a servo drive that quietens down the machinery.

The streamlined application of the labels and the efficient use of label glue enhance the quality of this progress.